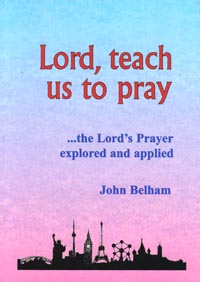 Born in Malvern, The Reverend Dr. John Belham has his family roots in Worcestershire where he grew up. After ten years of study in London, he served as an assistant minister in Cheshire before becoming Rector of a growing cluster of rural parishes. He is married with four grown-up children.

Limited Editions of the book that accompanies this website are available to buy online.

Many years back Dr J. I. Packer wrote a series of short articles on the Lord’s Prayer for inclusion in church magazines. It was this series that first began to open my eyes to the richness, breadth and depth of this most wonderful of prayers. I gladly and gratefully acknowledge that all that is now offered has sprung from those early seeds.

A Praying Teacher, a Crystal Diode and Winter Wheat

A twelve year old lad, headphones on, oblivious to the world, sprawled out at the top of the stairs – right in the way – fiddling with a very simple radio receiver; a crystal set. Will it work? Only if he can get the little wire to touch on the crystal at such a point that it makes a one way electrical gateway; a diode. He tried this way and that, between times adjusting the tuning condenser to search for the different radio stations. Nothing. Then, suddenly, he hit the spot. The little wire, known as the cat’s whisker, was now making contact with a ‘sweet spot’ and the whole device sprang to life.

A live broadcast filled my headphones and ears. Was it music? Was it the news, the weather or a discussion? No, it was none of these. It was a preacher preaching! *
Was it the preaching or the fact that the little, home-built radio set worked? I don’t know. But I listened right to the end and, when it finished, determined that I wanted to hear more. The preacher’s talks were being relayed by telephone line to a local church, and I got my Dad to take me to hear him. No razzmatazz, no great build up, nothing visual, just a song and a talk. But through it the Lord God spoke as clearly as any voice, ‘John, it is you I want’. I nudged my Dad but he was quite unmoved and, in talking with the minister of the church we attended as a family, he was assured, ‘Don’t worry, he’ll soon get over it.’ I would have done, but for Miss Gibbs, a teacher at school who taught both English and what was known in those far off days as ‘Scripture’. With hindsight, that lady plainly not only taught her youngsters but coveted them for the Lord and prayed for them. It was Miss Gibbs who recognised that the Lord God had begun a work in my life and patiently encouraged me to begin to read the Bible.

The little seed of faith began to grow, springing up like wheat sown in the mild autumn weather. However, as a family, we moved away very soon after that and the next ten years proved to be a very severe spiritual winter, with little or no Christian fellowship or encouragement. Spiritual life withered away, like the wheat in winter; yellowed and to all appearances dead and finished. Until, that is, a spiritual springtime in my twenties saw faith rekindled and the winter-sown wheat vigorously sprouting.

It was the second, tiny ‘chance happening’ under the hand of God. David, a friend in the local actors’ club, offered me a lift. He was going to a church in ‘West Ken’, which I took to be a few miles down the road in Kent. It wasn’t, it was in Kensington – yet here was the vital Christianity I hadn’t encountered since a young schoolboy.
After a while, I was even willing to heed a long-known, nasty, nagging suspicion that the Lord God would have me ‘turn my collar round’ – to become a Christian minister. It culminated in a prayer that you won’t find in any prayer book, ‘O.K. Lord, you win.’ My employer’s reaction astonished me, ‘But of course,’ as did my landlady’s, ‘Yes, it is about time you stopped messing about.’

I have had the privilege of marrying, bringing up a family and working for many years among some wonderful people in both city and rural ministry. Day by day I remain thrilled and amazed by the gracious dealing, mercy and love of the Lord God, and just so grateful for his kindness, mercy and patience with such a difficult and wayward son. Yet an adopted son I find myself to be, and one rescued and redeemed by the precious cross of his Son. In the apostle Paul’s words, I gladly confess, ‘I live by faith in the Son of God who loved me and gave himself for me’. Of course, ‘He’ll soon get over it’. But, by the grace of the Lord God, I haven’t yet, and that was said over sixty years ago!

As you can see, it is the story of God’s gracious dealing with a rebellious and unwilling child and could well be summed up as it began . . . ‘saved – by a cat’s whisker’.

*A broadcast from Billy Graham’s visit to London, Harringay, 1954

It is in this setting of great thankfulness to my heavenly Father, that the phrases of the Lord’s Prayer have become such a precious spur to worship and guide and compass for life.