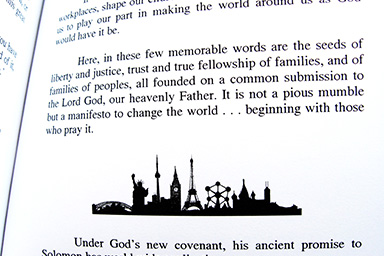 Our Lord’s pattern is the Hebrew pattern of prayer and worship kept together. The petitions are balanced and strengthened by reminding ourselves of the power and glory of our heavenly Father. Having just looked at the great dangers and evils that surround us, we have every reason to be weighed down. And so how good it is to turn our eyes heavenward and boldly affirm the glorious truth that our heavenly Father is the sovereign Lord; to him belong all power and glory. He is well able to rescue us, deliver us, and keep us safe even though we walk, maybe often, through the valley of the shadow of death.

One of the characteristics of stately homes is their balance, their symmetry. If one wing was never built, or was lost by the ravages of fire or dry rot, the whole building is left out of balance; half missing. Similarly with prayer, if we fail to remind ourselves of the greatness of God in praise and adoration we shall be spiritually cast down by life’s great challenges, difficulties and battles. We may also become prey to a dryness of spirit which reduces prayer, and indeed the whole of our Christian living, to an unlovely, formal duty, something which has to be done and yet which has within it no contagious, God-centred joy and gladness.

On the other hand, if the aspect of heartfelt petition for this fallen world is lost we may enjoy ‘praise and worship’ which is quite literally out of this world. But it will be in a compartment on its own – stirring, heart-warming, deeply moving at the time and yet having little or no relevance to the reality of living in this world for God.

In public worship and in private prayer, therefore, plead with the Lord from a full heart about all the practical issues of living and revel in the fact that he is able to keep us from falling, able to present us faultless, able to do even more than we can even begin to think or imagine . . . the kingdom, the power and ultimately all glory belong to the Lord God, our heavenly Father.

The little Hebrew word ‘amen’ so often thought of and used as if it were a ‘religious full-stop’ is in reality far greater. It means ‘certainly so’ or ‘let it be so’ and gives us the opportunity to ‘sign our name’, and add our own voice to the great affirmations and petitions of this most wonderful of prayers.

Within the services of the Church of England we use both forms of the prayer. I used to feel we were ‘given short measure’ if the prayer ended with, ‘Deliver us from evil.’ It felt unfinished; as if, as a visitor, we had been suddenly ushered from a great house having been shown just a few of the magnificent rooms! However, it is in fact a fair reflection of what we find in the New Testament.

If you study the various ancient manuscripts from which our New Testament has come, you find that not all of them have the fuller ending. Many texts stop short, ending with, ‘Lead us not into temptation,’ or, ‘Keep us from evil,’ or even earlier. There is clearly some uncertainty about the conclusion of the prayer. The traditional ending could have been something which the apostles, or early Christians, added as they came to pray it. As they prayed they came back to thinking about our heavenly Father and the great themes of this prayer and ended, surely rightly, on this note of praise, giving glory to Almighty God.

This concluding peal of praise is absolutely consistent with the whole teaching of the scriptures. It is a telling forth of who God is; the one true God who is the king of the universe. Although around us men and women ignore him, although there are many who live in active rebellion against him, we affirm that God, the living God, is Lord. Let all the earth know that the one, living God reigns.

You might ask, ‘Is such a statement of the sovereignty of God a charitable, a “Christian”, attitude?’ We live in a very tolerant age and surely the spirit of Christianity is to be tolerant. Clearly, there is a place for tolerance, but when tolerance, gentleness with those around us, leads us to suppress the truth, then surely the principle of tolerance has led us to overthrow something far greater, far more important. It has led us to overthrow truth itself.

It is as if there were a fire at a great house and a servant went to bring a young son out of the house, but the lad said, ‘No, no, leave me alone. I want to sleep, I don’t want to come out.’ The servant would have to say, ‘I am sorry but you must come out. There is no choice, because there is something great at stake – your own life – and that is much more important than sleep.’ If we allow tolerance to overthrow truth we shall be in great trouble. This is the particular danger in which we find ourselves in our own liberal, tolerant day. We are called by God to be his heralds, to proclaim the gospel, and yet we find ourselves squeezed by the world into being so tolerant and gracious, that we cease even to affirm that to God, and to God alone, belong the kingdom and the power and the glory. ‘Brothers,’ says the apostle Paul, ‘pray for me that I may speak boldly as I ought to speak.’ A prayer worthy of echoing both for ourselves and for our Christian leaders in a world that increasingly tolerates almost anything . . . except the call to bow the knee to the one true God; the God and Father of our Lord Jesus Christ.

Every great house has one or two particularly fine views; views that display the estate, the gardens and the house to their very best advantage. As we conclude the Lord’s Prayer we are given such a view. ‘The kingdom, the power and the glory . . .’ words which tell out the sovereign glory of the Living God our heavenly Father. There is no other with whom to compare him. His alone is the kingdom, the power, and the glory. The words themselves take us back to the heart and focus of the prayer, to the three great state rooms: the honour of his name, the coming of his kingdom and the doing of his will.

This traditional ending is, as it were, a stepping back to take in the whole view of the great house in its setting. In a phrase it sets before us the whole vista of God’s glory and purposes for this world. Like the flag, the royal standard, flying above a stately home, it may or may not be as old as the house, but it is there to affirm that the Lord is King and that the Lord is in residence. To him be ascribed all honour, power and glory.

Rescued from the gentle, well-meant but unthinking murmur of an ‘act of worship’ and prayed with understanding, passion, imagination and a willingness to heed and act upon our own prayer, the Lord’s Prayer becomes – not the formal opening of a vicarage tea party or parliamentary session – but the power behind the great, guiding principles by which the Lord would have us conduct every part of our lives.

Here, in these few memorable words are the seeds of liberty and justice, trust and true fellowship of families, and of families of peoples – all founded on a common submission to the Lord God, our heavenly Father. It is not a pious mumble, but a manifesto to change the world . . . beginning with those who pray it.

If my people, who are called by my name, will humble themselves and pray, and seek my face and turn from their ungodly ways; then I will hear from heaven, and will forgive their sin and heal their land.

Under God’s new covenant, his ancient promise to Solomon has world-wide application.